Hello friends!  I'm here to show you the progress I made on my weekend projects.

Fortunately, the two quilt backings I needed did not require any piecing.

I found a very plain piece of 108” that will work for the block of the month quilt.  No picture this time but I’ll show it once it has been quilted.

I had two choices for the Witch’s Night Out back. 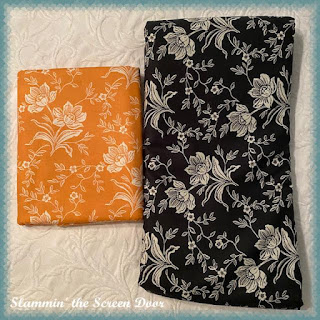 I originally purchased the orange fabric which would require piecing since it is the standard 42-44” width.  My procrastination in prepping this one paid off because Fig Tree released the black fabric in 108” which is the color I wanted for the back anyway.  Win – Win!

These quilts will go to the long-armer once I finish Plaid Farmhouse. 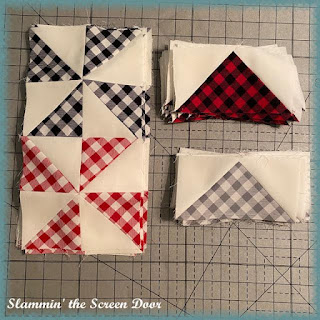 I didn’t get as far along on this one as I’d hoped.  There are 64 completed flying geese and I turned 96 half-square triangles into pinwheels and pieced those segments together.

It was great to be at the sewing machine again.  I enjoyed every part of the process, even when the thread started shredding and I had to replace the needle and also when I needed to wind a bobbin. Who knew there would be so much pleasure in winding a bobbin?  I clearly need to sew more often 😏 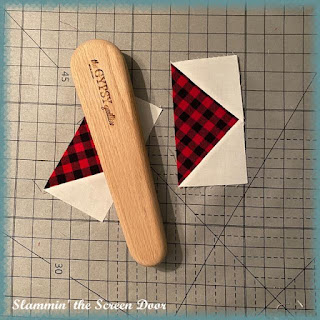 Have you ever used a tailor’s clapper for quilting?  Fat Quarter Shop promoted it on one of their weekly videos so I thought I would give it a try.  You press your seam then immediately place the clapper over it.  Let it sit for a couple of minutes and your seam lays really flat.  It worked!  The clapper absorbs the heat and the pressure sets the seam as the fabric cools.  I used it with and without steam and the results were pretty much the same.

That is my update for today.  I hope you had a nice weekend.  Did you sew?

That's going to be a really pretty quilt! I've never heard of a tailor's clapper. Glad it worked for you. :0)

It's nice to see you sewing again! So the clapper works but it seems like it must slow the pressing down having to wait?

My thought is the same as Vicki in MN. It seems like the clapper would really slow me down.

I look forward to seeing this quilt when it is completed.

Love your backing choice! I don't have a clapper but I have placed a big square ruler on top of a "steamed" block for a few seconds - until the "steam" fog disappeared and it "dried". The weight of the ruler pressed on top of the block made it come out REALLY flat - ;))

Procrastination can be good when the perfect fabric finally comes along.