My Mister found this while we were walking around Nassau… 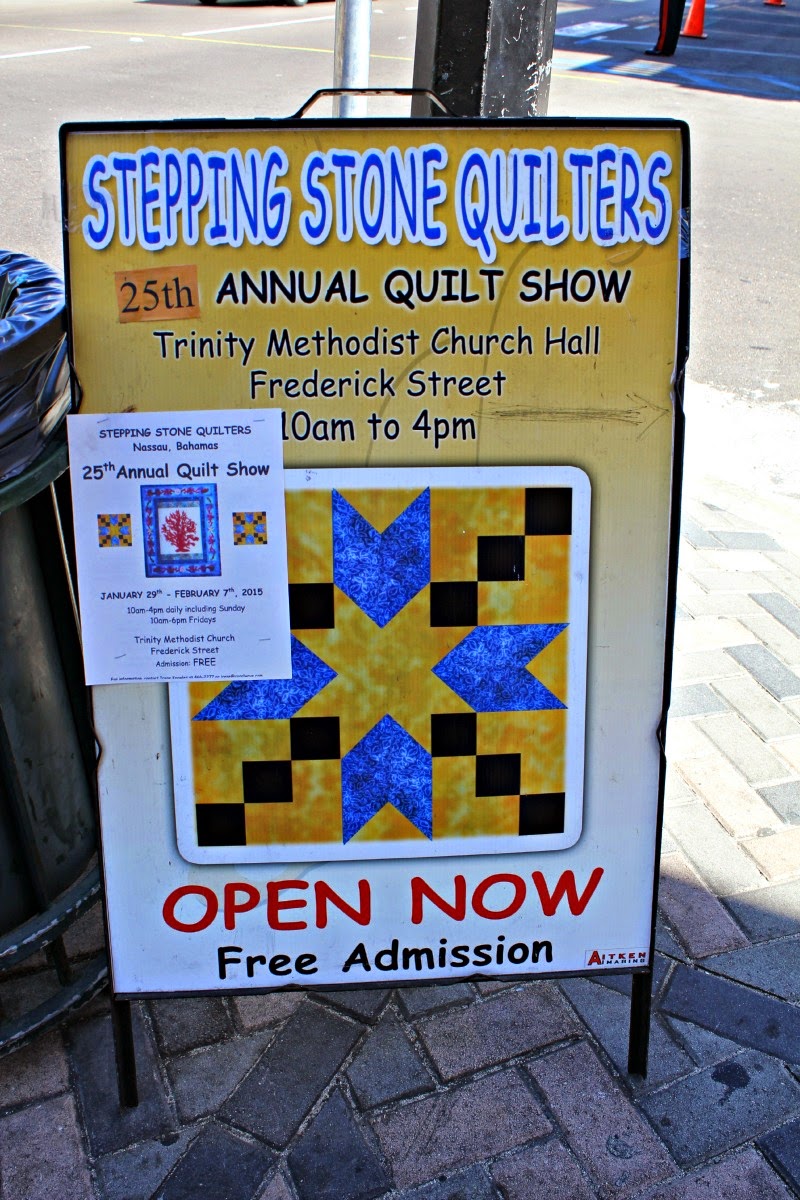 We quickly learned that the quilt show was displayed in the downstairs hall of a very old Methodist church. Trinity Methodist Church is celebrating its 150th birthday this year.

I took this little description from The Bahamas Conference of the Methodist Church website.
Foundation stone was laid August 21st 1861 and opened April 2nd 1865. Destroyed by hurricane in 1938. The present, organ installed in 1964 and stained glass windows in 1973.
On 21st August 1961 the cornerstone was laid by His Honour Charles Nesbitt, Lieutenant Governor, acting in the absence of the Governor of the Bahamas, Governor Bayley.
The Church was built to accommodate about eight hundred persons (seated) at a cost of L6, 200.00. After many difficulties encountered in the construction of the building, it was completed in 1865 and a special dedication service was held on 2nd April of that year!!!
On 30th September 1866 the building was demolished by what was later termed “the notorious 66 gale”. The hurricane sprang up whiled the Rev. Hilton Cheeseborough was in the middle of his sermon at the evening service of September 30th.
By 1869, before Rev. Cheeseborough left the colony, the Church was completely rebuilt from funds recovered from the insurance of the building. A large elegant gallery ran from wall to wall on the western end of the Church.
On September 1928 the church was again extensively damaged by hurricane, during which time the gallery and much of the end were completely flattened. The remains of the beautiful Pipe Organ were found in the basement.
The building was soon restored under the able leadership of the rev. Walter H. Richards. However, the gallery was not replaced but the eastern end of the building was designed that it could accommodate the choir.
In the 1929 hurricane the building did not sustain much damage except for the steps which separated from the eastern end of the building.
In 1963 a beautiful tree-manual wicks Pipe Organ from Illinois replace the Hall Organ from Connecticut, which had been installed in 1929.
In 1973 the members thought it would be a good idea to replace the plain windows with beautiful stained windows, each of which bears a message.
In 1989 the roof of the present building was completely reshingled, at a cost of $128,000.00.
Trinity is proud of its rich heritage and its members continue to keep the torch of Jesus burning. We trust that God will enable her to serve the community for many years to come.
I love old buildings and wish I could have taken pictures of the amazing stained glass windows but, being a Sunday, there was a service in progress.  The windows were designed and manufactured by G. Maile and Son of Canterbury, England.

Here some photos of the outside. 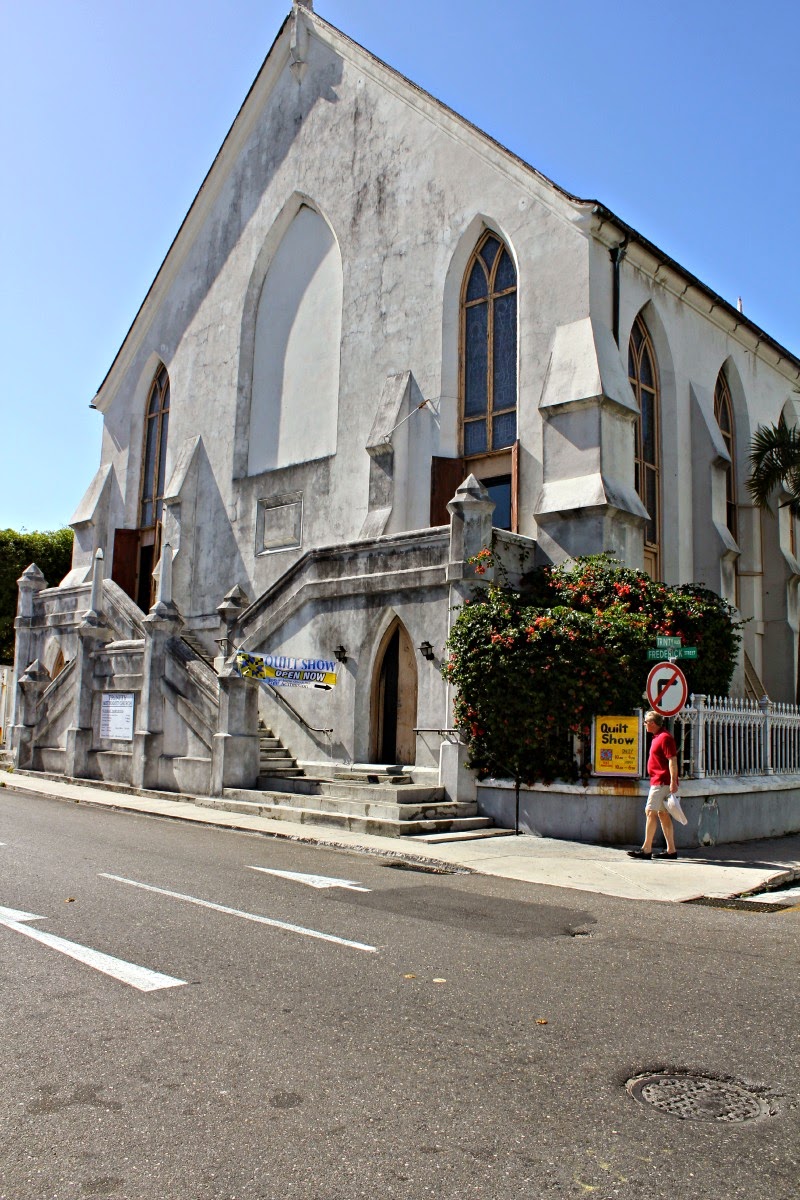 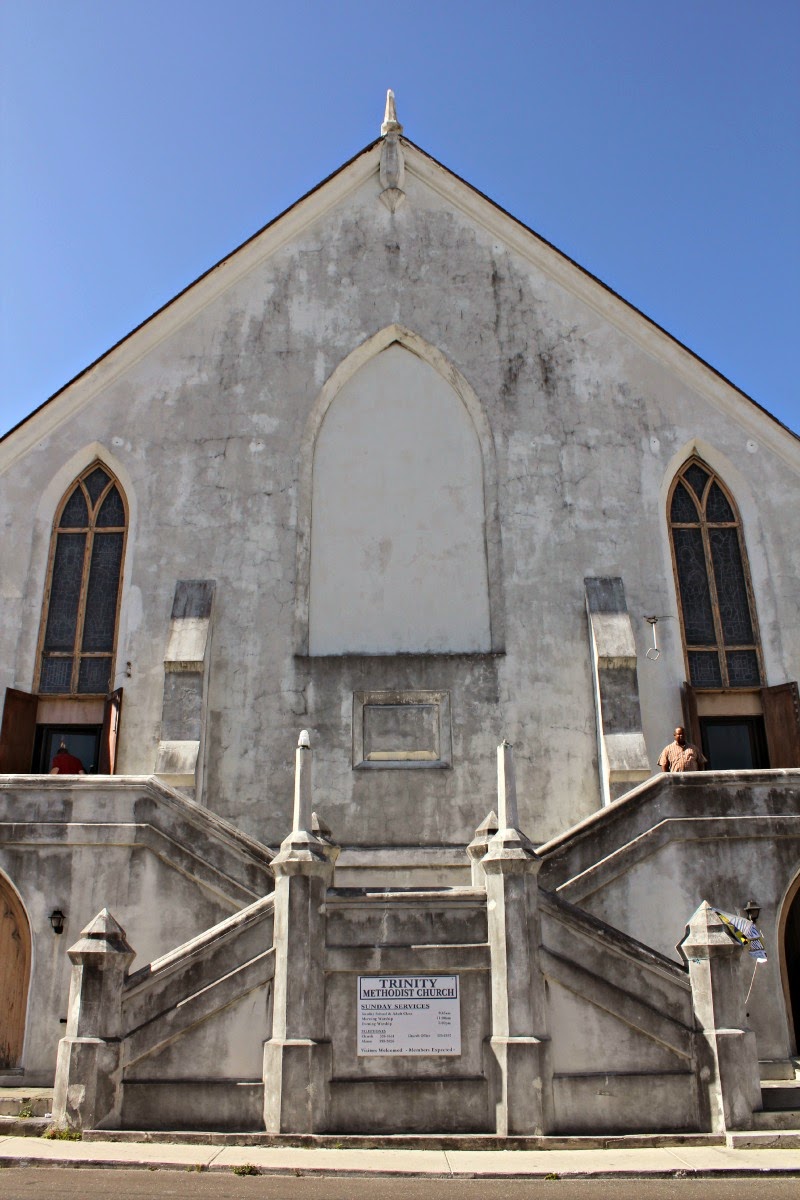 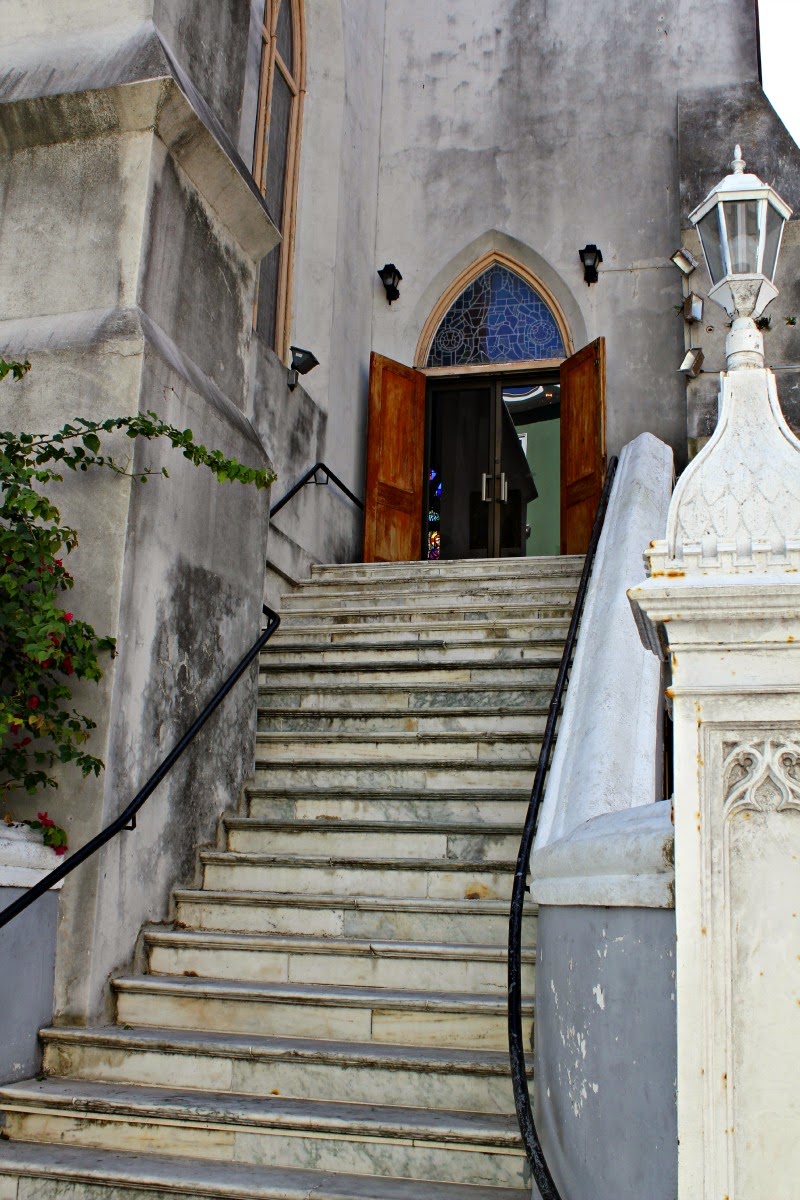 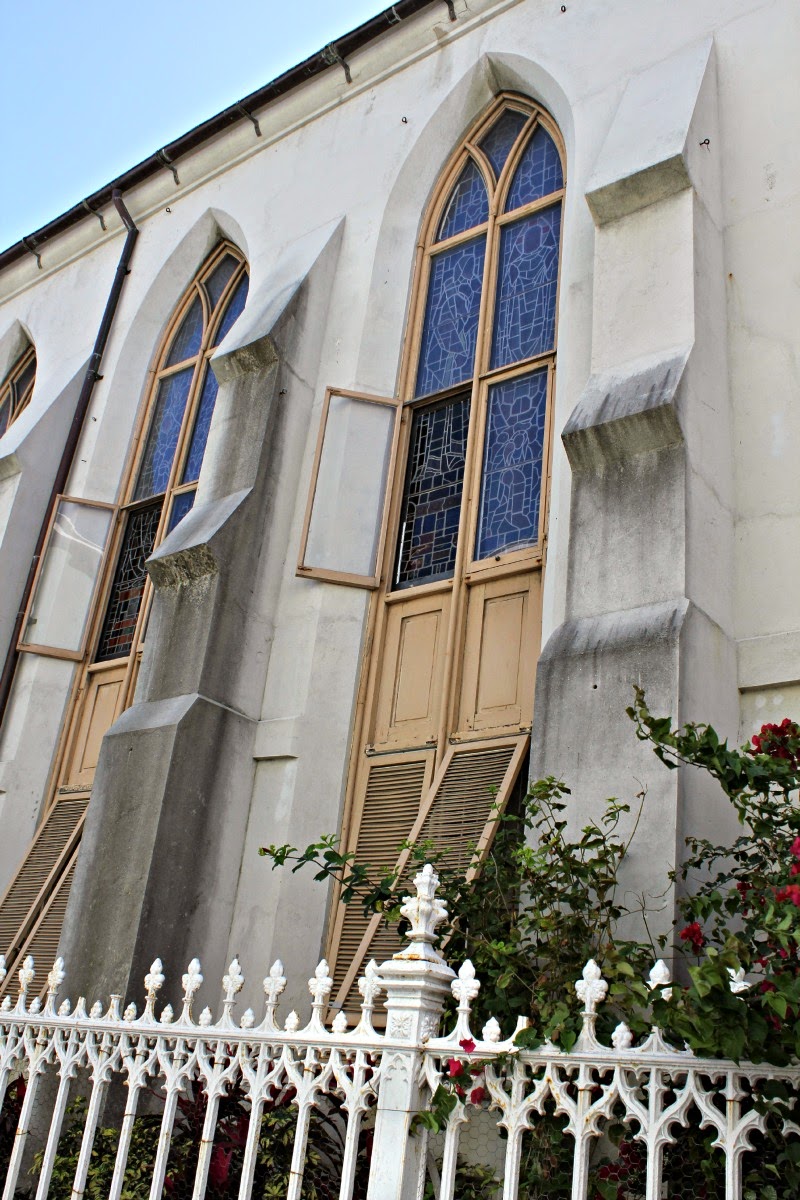 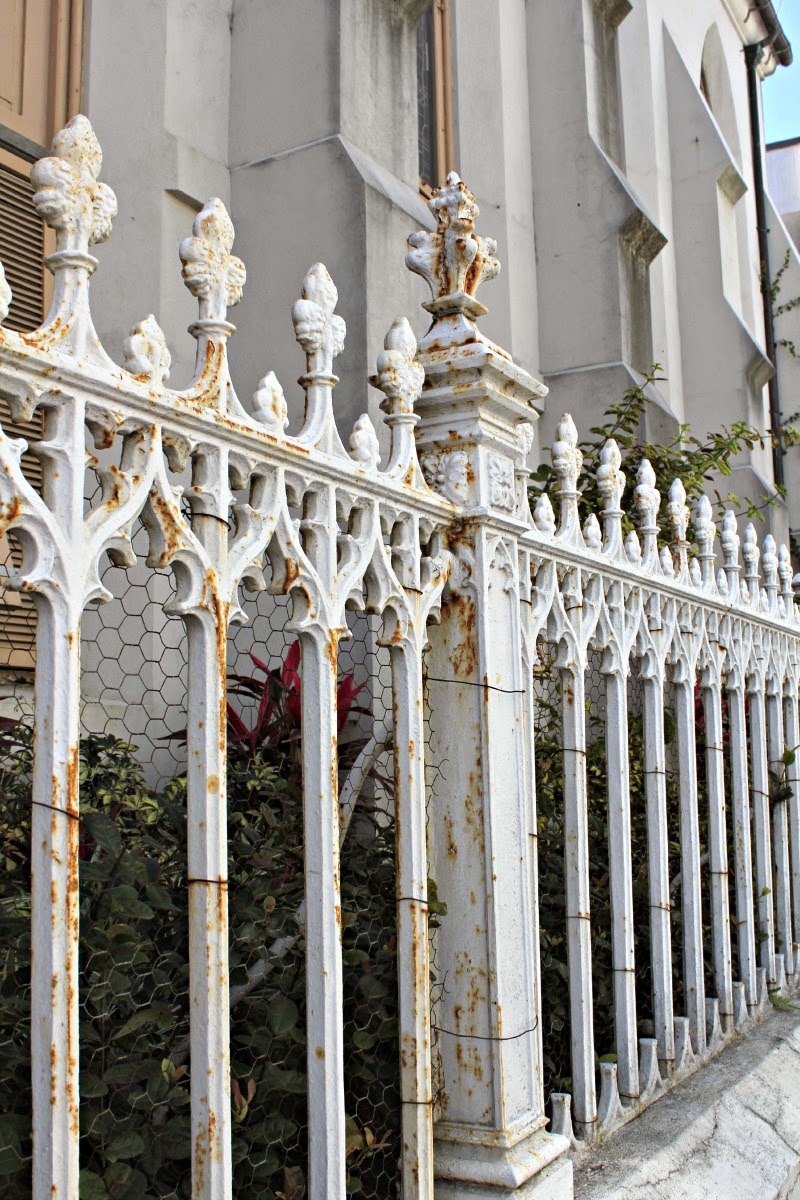 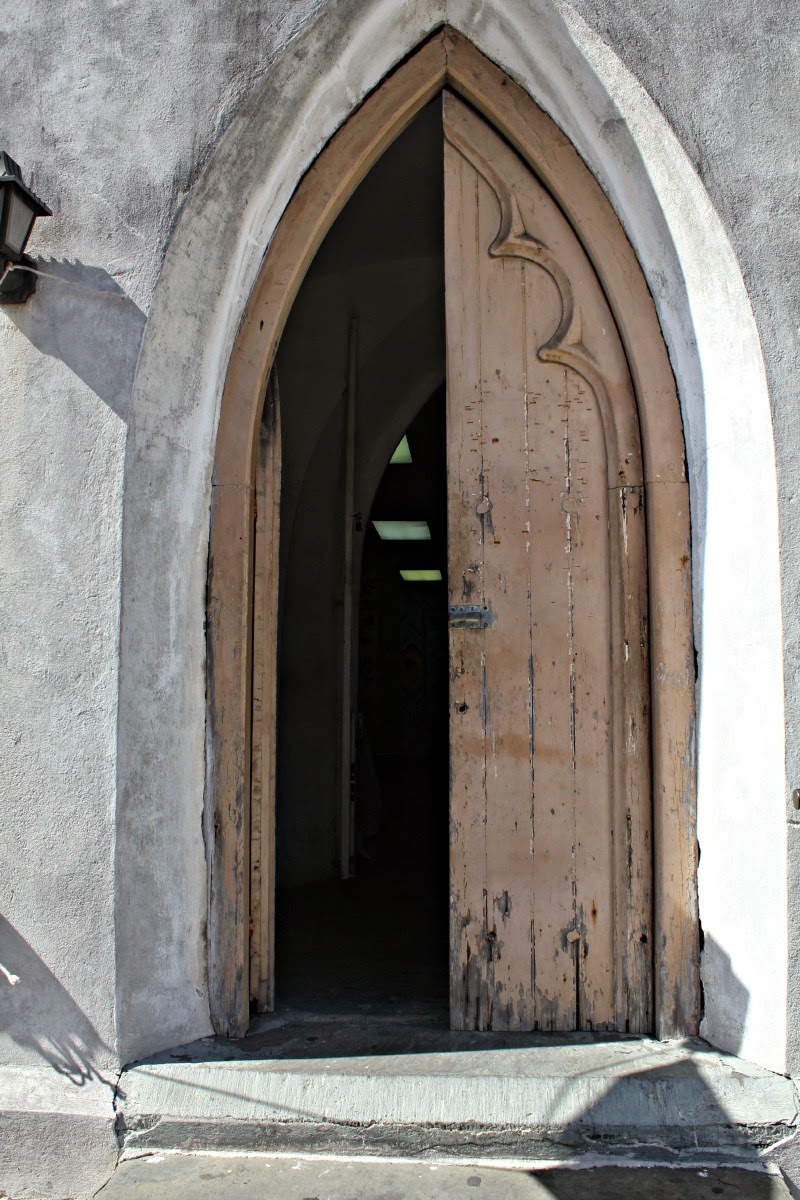 This is the hall door, entry to the quilt show 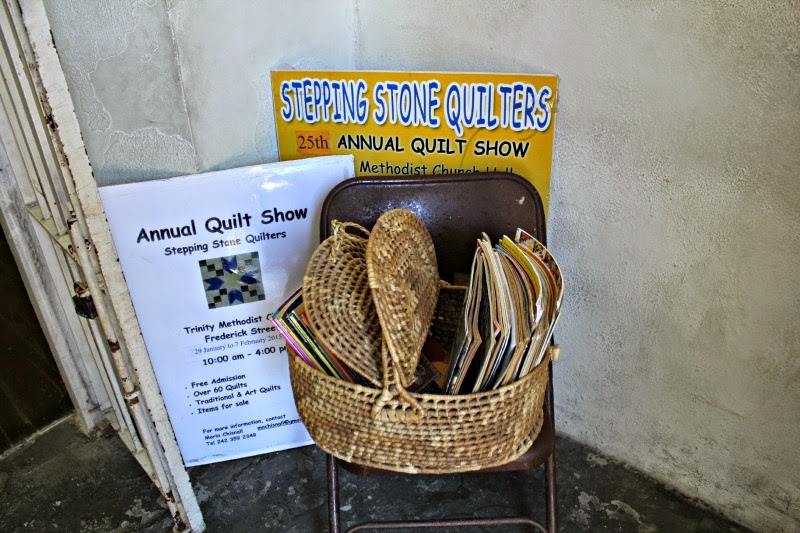 Free books just inside the door

Stepping Stones Quilt Guild has displayed their quilt show in this church for 25 years, free of charge.  The guild made this huge quilt and presented it to the church as a thank you and also a birthday gift. 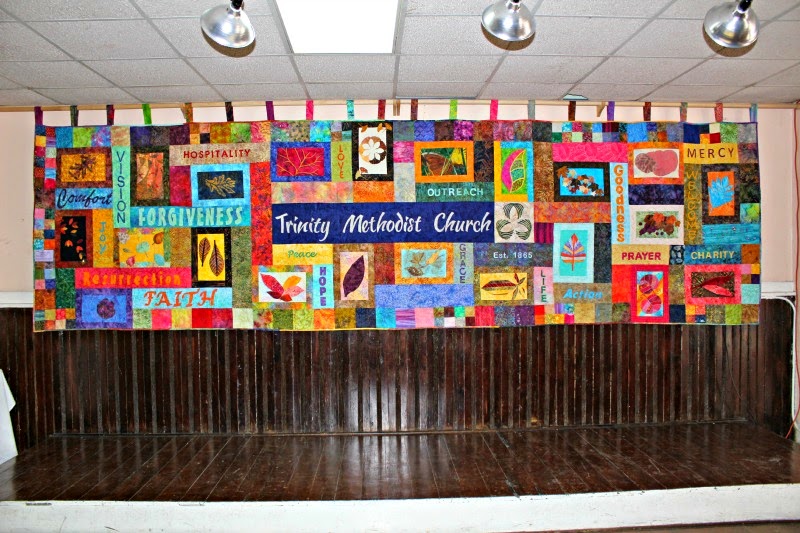 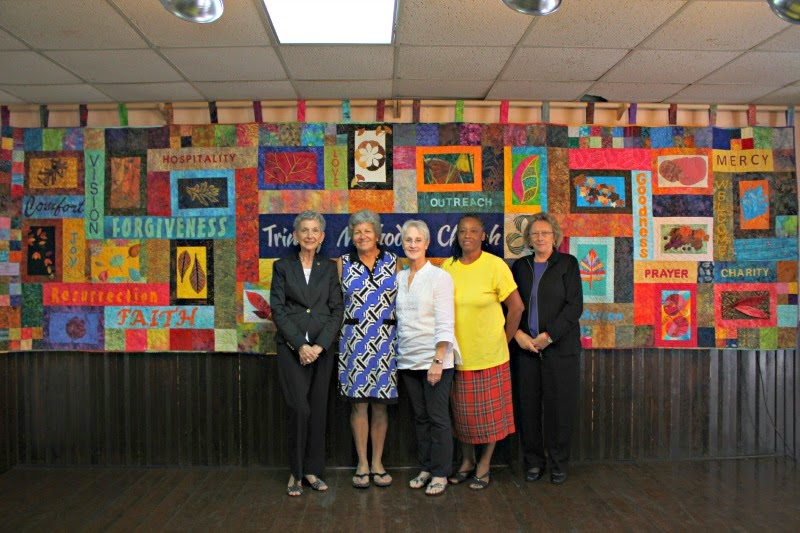 These are the nice guild members that were hosting the day I was there.

As soon as I walked in the door, one lady announced “we have a quilter.”  Much to my surprise, they were looking at me.  Then I realized I was carrying my Just Jane bag…dead giveaway J You can read about my Just Jane here.

One lady took pictures and wrote down all of the information on how she could get her own copy of Stephanie’s book Uncommonly Corduroy.  (Yes, I took a picture of her taking a picture!) 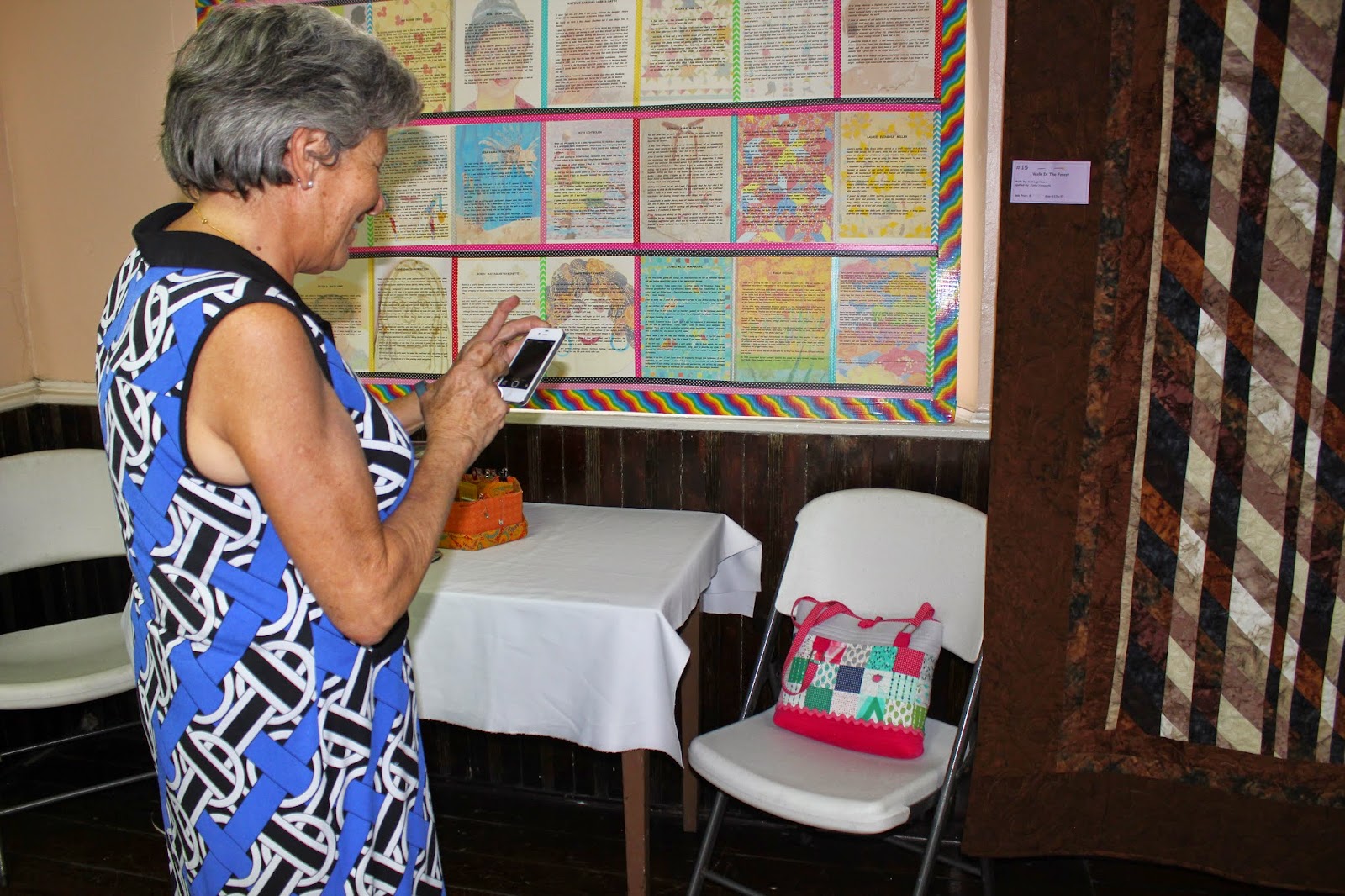 Check back for Part 3.  I promise there will be few words but a lot of quilty goodness from the show.

What a beautiful old church! That huge quilt is beautiful. I will ahve to look this place up if we get back to the Bahamas. Have a lovely weekend!

Love the history on the church and its many reincarnations. It's a beauty.

One thing I love about cruising is the chance to see old buildings and learn their history without having to drive all over the countryside looking for them! You hit the jackpot, Jeanna! And a bonus to be recognized as a quilter and give a little credit to our friend, Stephanie!!
Cheers!

I love that you got "outed" as a quilter. Ha ha.